Sorry this is late (and some of you haven't let me off), but it was worth the wait for the world's best dessert.

On Sunday, we saw a very fulfilling Monte Carlo race. Ferrari continue to show they are back at the top (or nearly). Lewis drove a perfect race. Mercedes pulled a clever trick to allow Nico to reduce the championship gap. And Maclaren are finally catching up with Sauber. Even Tally got stuck in (but sufficed with ice cream for Sunday afternoon): 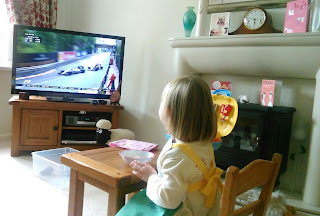 But to the important part - our dessert. Having found a pleasant looking treat from a three Michelin Star restaurant, I took the computer to Sian for a little advice on how I might cut down the extents of my work - so she did it herself.

It contains four layers of: cake, nutty crunch, the softest mousse and a rich chocolate covering, topped with gold leaf. Named after the restaurant of its origin, it is simply the Louis XV dessert. 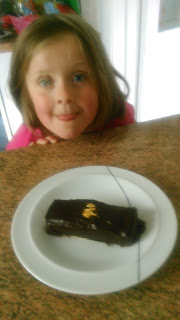 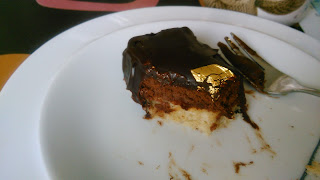 The adults all enjoyed it, including Sue, who doesn't appreciate desserts. Sufficiently delicate and light but rich and indulgent. Heidi decided she didn't really want any dessert, but tried separately each layer and liked them all. Tally on the other hand found more fun poking it.

But to sum it up, David (Rowe) concluded, though it had been voted by those in the know to be the world's best dessert - they obviously haven't ever tried apple crumble and custard.

There are 6 left - let me know quickly if you want one.