What a race. So epic that the 90minute BBC highlights show had to cut out chunks of the race as much as ten laps long! Nice to see Mercedes struggling for once, but I was expecting Maclaren to reach the end of the race, in the one and only race that they are not drastically disadvantaged by engine power.

This week's cake was more demanding than any other - especially making the storage tin.

Moon cakes are this week's treat - durian flavour! Moon cakes are a traditional gift to give to friends and family at the Chinese mid-Autumn festival. It was recommended that I go for the durian flavour option - which I assume to be because it fits with the Singapore theme better than other options.

The packaging was very impressive. I'll have to find something to use the decorated tin for.

As you might have expected, the cakes were not to our Western taste buds. I can't even think of anything to compare it to - except the centre is two hard boiled egg yolks - and yes it literally is that. The outside is sort of pastry, but not like you've ever had it before. And the slightly green bit between the two is to be avoided. For something made with the first listed ingredient as sugar, these are not sweet.

I think we should promote that Singaporeans continue to focus there efforts on healthcare, education, criminal justice, and importing European desserts. 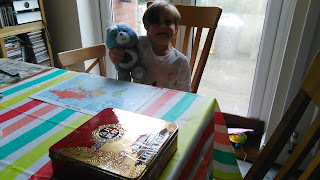