Having feasted on the treats of the world it's time to sit back and think on the quantities of sugar consumed in so many forms, before we all become diabetic.

We have eaten our way around the cakes of the world. Unless your country doesn't have a Formula 1 race - in which case it doesn't count (even little Monaco has a race).
What we have learnt:

Our annual awards go to:
Heidi's favourite:     Doughnuts (USA), cinnamon buns (made for Canada - though not local) were disappointing in that they didn't come with the icing topping of the Starbucks version.
Natalya's favourite (though she didn't eat many):     Checkerboard cookies (Germany), though the Louis XV (Monaco) was good for poking
Dave's favourite:     Louis XV, Nanaimo bars, Semifreddo, Doughnuts etc
Sian's favourite:     I don't know (she fell asleep while I was writing and I felt it might be wrong to wake her for an answer)

Most impressive:     a close call between the glamorous Louis XV dessert (Monaco) and the "ooh"s which met the cutting through the layers of the Dobos torte (Hungary)
Most expensive:     kuih lapis (Malaysia), the fresh pandan leaves alone cost £20 to import from Thailand.
Strangeness:     Bird's milk cake (Russia)

Phrase of the year:     "Smells like an old gym bag"
Failure of the year:     This was toughly fought between numerous contenders, but the prize goes to tocinillo de ciello (Spain) - it ended as a bowl of sweetened, raw egg - it might have been one of our favourites if it went right
Most lazy:    Belgium chocolates, but no one complained
Worst dessert ever:     Moon cake (Singapore) and it has a reputation among the office staff that lives on - they no longer inherently embrace the offer of cake 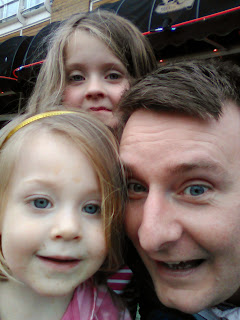 But now I need your help - what should our theme be for next year - ideas please in the comments...