So, the moment you've been waiting for... not the first race, but rather the announcement of this year's foody theme for our world tour.

(For those of you who don't know, over the past three years we have eaten dinners, cakes/sweet treats and finally breakfasts from each of the countries of the Formula 1 world tour on their respective race weekends. Some items we have added to our general cooking repertoire, others are never to be spoken of again. Look back at previous entries if you have nothing better to do with your life.)

Stumped for new ideas this year I was reluctantly going to repeat the cake theme, only because, no one ever complained about cake (except for Bahrain, Malaysia, Singapore etc - see 2015 blog entries). However, Heidi was struck with a moment of inspiration earlier this week when she suggested, fruits. Of course just eating a fruit wouldn't be complete without some baking, so I think we'll try to make something edible with the fruit from each country. Ultimately the aim is still to educate my girls about the world outside of Cwmbran (that some of their school friends have never left), but in doing so we like to fill our bellies with the world's delights that we wouldn't otherwise have even known about.


And so we begin with Australia. A little internet searching led us to find a number of fruits popularly grown in Australia - but some further digging concluded that most of those were neither native nor unusual to us - just like everything else we know about Australia. A friend of ours from Swansea, now living back 'home' in Australia gave a collection of suggestions which concluded that Mangoes were just about the best suggestion. (Though I acknowledge they are not native, we'll overlook that.)

Heidi insisted that she didn't like mangoes - maybe that's because of the histories of previous F1 world foods. But reluctantly she and Natalya tried it. Both loved it and Heidi has even declared it now her favourite fruit. I can only hope that the rest of this year's tour is so successful. 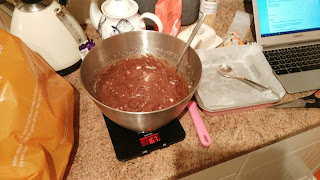 I also found that native to Australia are actually a range of bush fruits popular with the aboriginals. Though most of these are not available in the UK, finger limes are available online, for £40(!). But that list also included macadamia nuts.


So I made brownies with macadamia nuts in. The recipe went a little awry because I forgot to buy white chocolate and rather had to improvise with odds and ends available in the cupboard. Generally appreciated by all, but not good enough to hit the 'must repeat' list.