Spain is home to many fruits, but that which we know Spain for is oranges.

Strange though it might be, I was actually concerned that the girls wouldn't like oranges. They happily eat clementines or satsumas, but oranges can be bitter or sharp and they can take so long to peel that you lose interest.

But we had no such disappointments. We served oranges for lunch in the firm of duck a l'orange. I'm sure to receive an onslaught of comments condemning the use of a French meal for the Spanish GP, but the theme for this year is more the fruit that necessarily the use of it. While we have to wait another year before a French GP returns to the calendar, this will suffice.

Both girls had a go at zesting and juicing which made for some entertainment. Heidi even enjoyed drinking the fresh juice, which she hasn't previously.

Lunch was a delight for everyone, except Natalya fell asleep on Sian during the cooking, meaning they both had to wait until Natalya determined that lunch was due, in which time Heidi had helped herself to both plates!

So to summarise, oranges are an excuse to cook duck, which is an excuse to saute potatoes in duck fat. We love oranges. 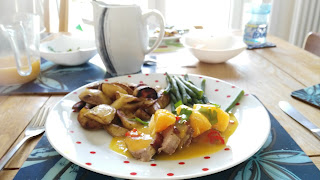