As we continue following the F1 races through the European season, we come to the most westerly European state of Canada! Famous for maple syrup, maple leaves, Celine Dion, ice hockey and more maple syrup, we took a stance that maple syrup was not a fruit and so Heidi was tasked with finding out what the country's national fruit actually is.

Apparently it doesn't have one.

But if it did, it might be blueberries. Already a well loved snack for both of our girls. The memories of Heidi's resulting green nappies are engraved on my memory for years to come (yes, blueberries make green poo!).

And of course the obvious recipe to make with blueberries is muffins. Tally determined that baked was not to her liking, we had ruined the blueberries.

We took them to share at today's church lunch, where they went down quite well. I had the usual sexist remarks, asking if Sian had made them herself or if we'd bought them

Of course they needed trying... 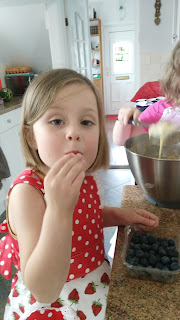 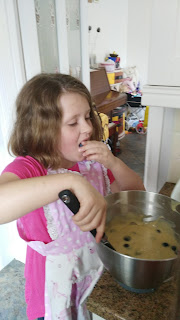