We come once again to one of my favourite races of the year, and celebrate it with a notable cake failure.
We attempted, and proudly destroyed, a classic rakott palacsinta, hereby creating a rakott pala-Cousins.
Stacked layers of crêpe, sandwiched with filings, sometimes topped with merengue. Some recipes show a little as 13 layers needed, but others up to 23. We managed a grand total of 6 before the mixture ran out and I couldn't be bothered to make 4 more batches so we stopped there.
While traditionally filled with options of jam, cream cheese, chocolate, crushed walnut or poppy seeds, Tally chose strawberry jam. Though Tally quite liked the idea of pummeling walnuts, she later remembered that she didn't like eating them and therefore refused to put them into the cake layers.
After building just 2 layers and using already 6 heaped desert spoons of jam, I had to suggest it might become too sweet! It took some persuasion but, with Heidi's assistance, I convinced her to allow a chocolate layer. We bodged together a milk chocolate sauce and spread that on. On initial testing it was a quite delicious filling, but as subsequent layers continued, the sauce gradually separated, seeping out pale brown runny butter ("chocolate wee").
Finally it was time to top it in merengue. I hastily attempted an Italian merengue. Tally, now fully taken with the idea of making these baking sessions her own and leaving her mark of the world, requested to add swirls of red food colouring. I had little authority to refuse.
The eggs whipped perfectly, but I suspect we hadn't heated the sugar sufficiently, which left me concerned over feeding everyone raw eggs. So we precariously transferred the warm soggy stack, now topped with liquid egg and patches of intense food colouring, to a baking tray, and finished it in the oven.
The final sequence, and now the essentially copyright feature of any genuine rakott pala-Cousins, is (from bottom upwards):
Crêpe, strawberry jam, crêpe, strawberry jam, crêpe, milk chocolate sauce, crêpe, milk chocolate sauce becoming denser, crêpe, strawberry jam, crêpe, truly dense milk chocolate sauce (which is now difficult to spread) and finished in merengue, highlighted with patches that could easily be mistaken for the blood and sweat of the baking team. The concoction should continue to ouze brown buttery goop as it comes out of the oven, and leaks further when cut.
A sugar overload for all. No one actually refused a slice ofrfailed to eat it, but the laps of cartwheels around the garden showed is full effects.
Enjoy making this yourselves but we don't recommend eating it shortly before bedtime. 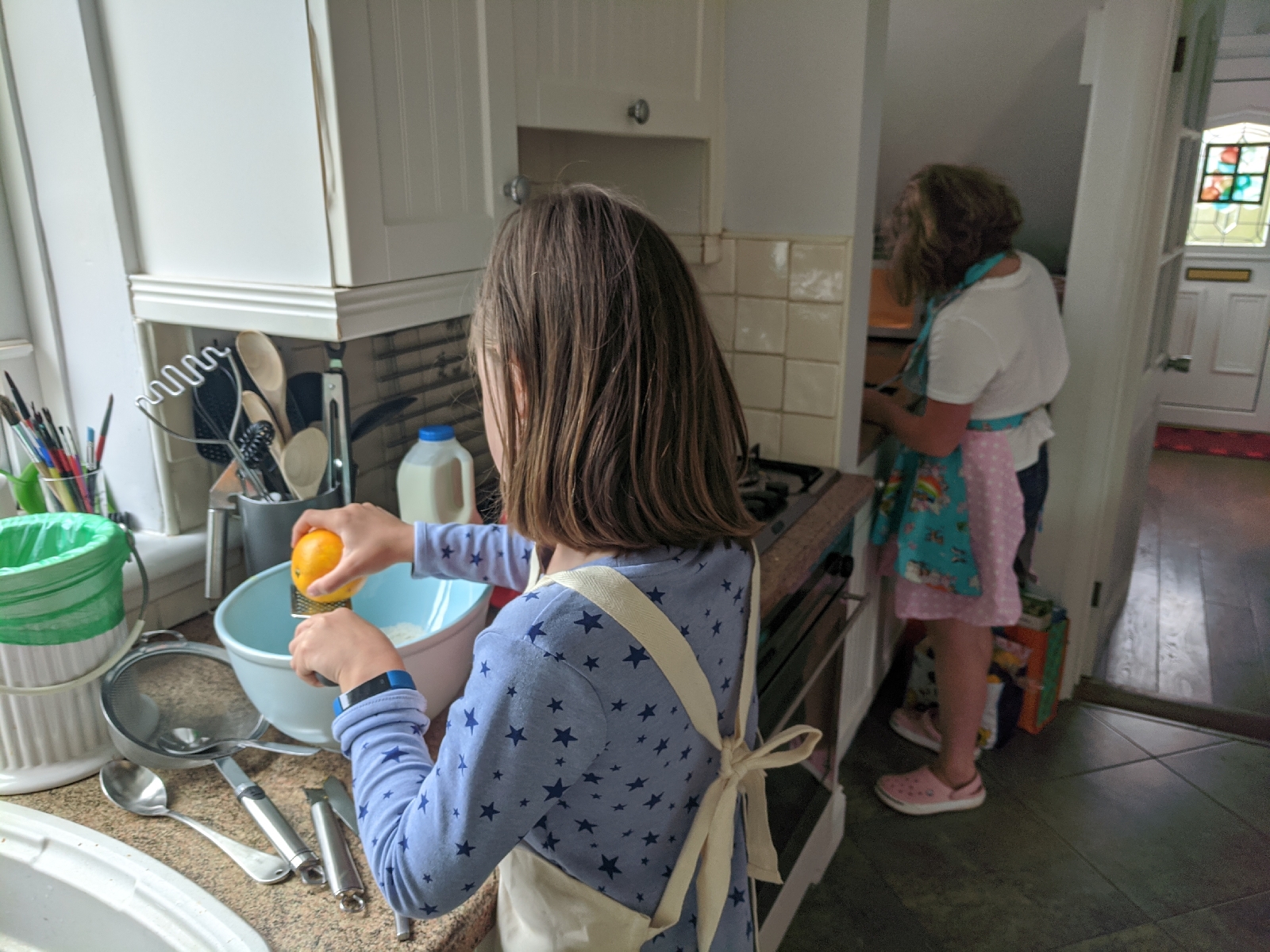 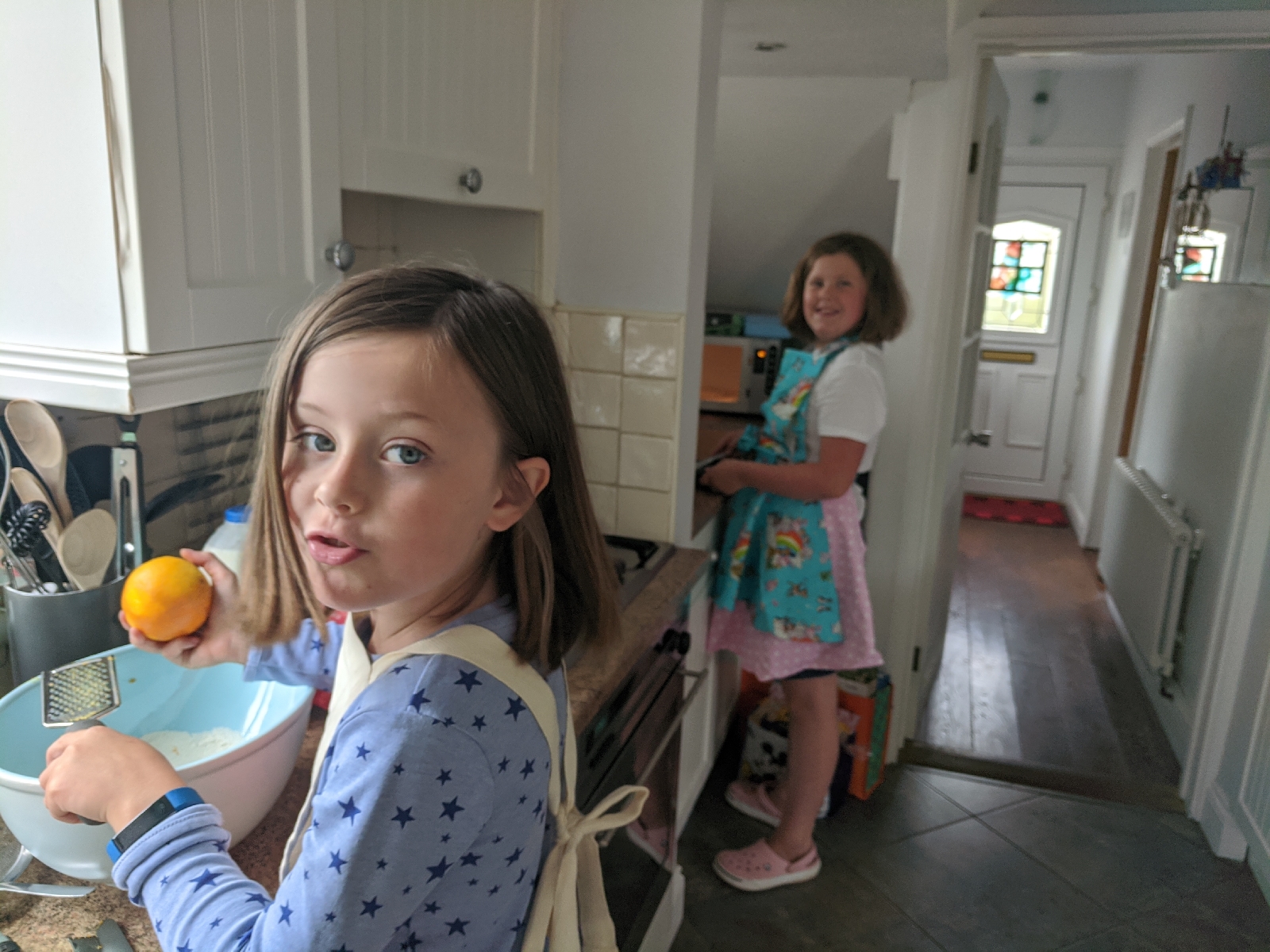 Then complaining because Daddy's taking photos 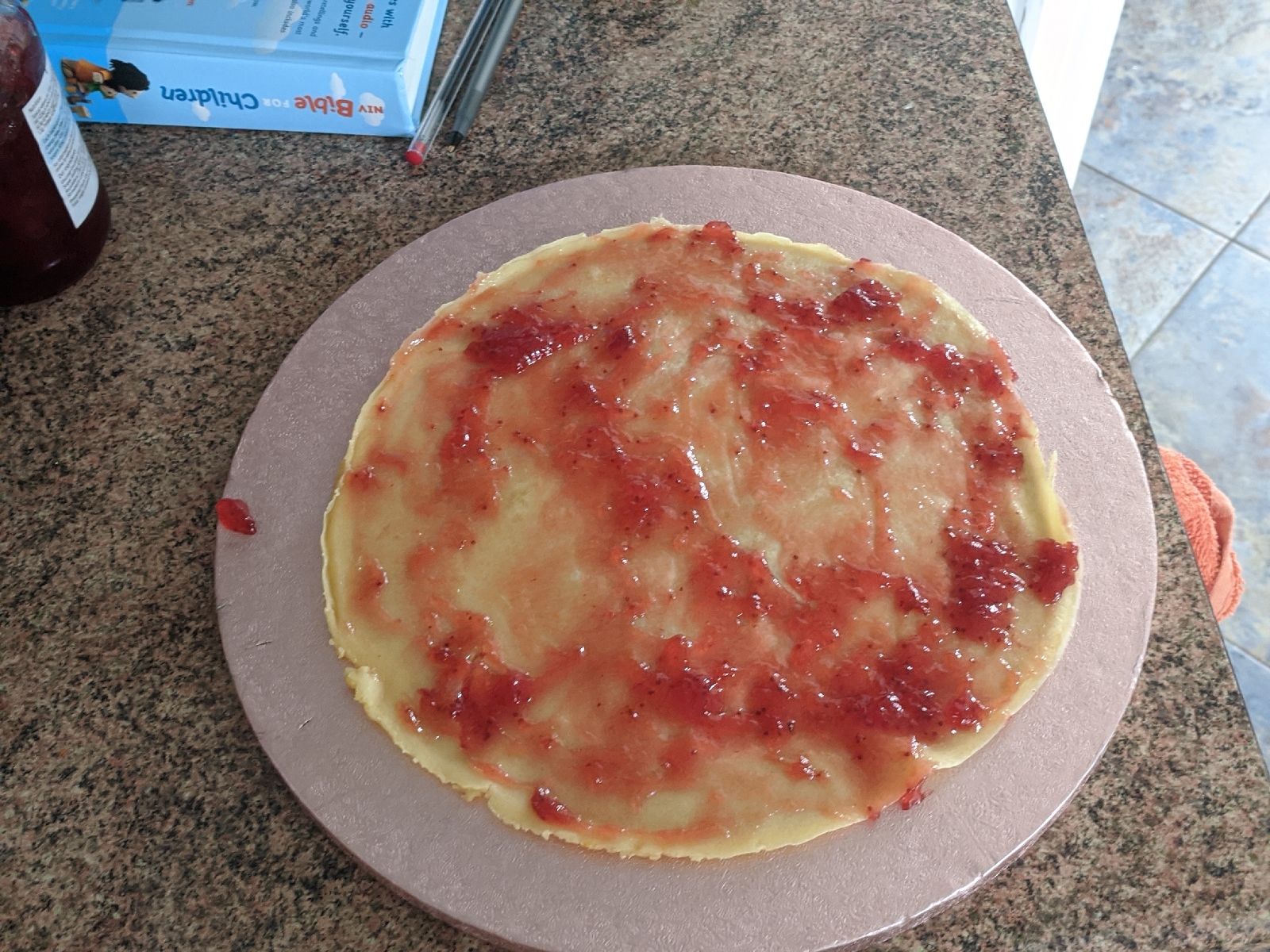 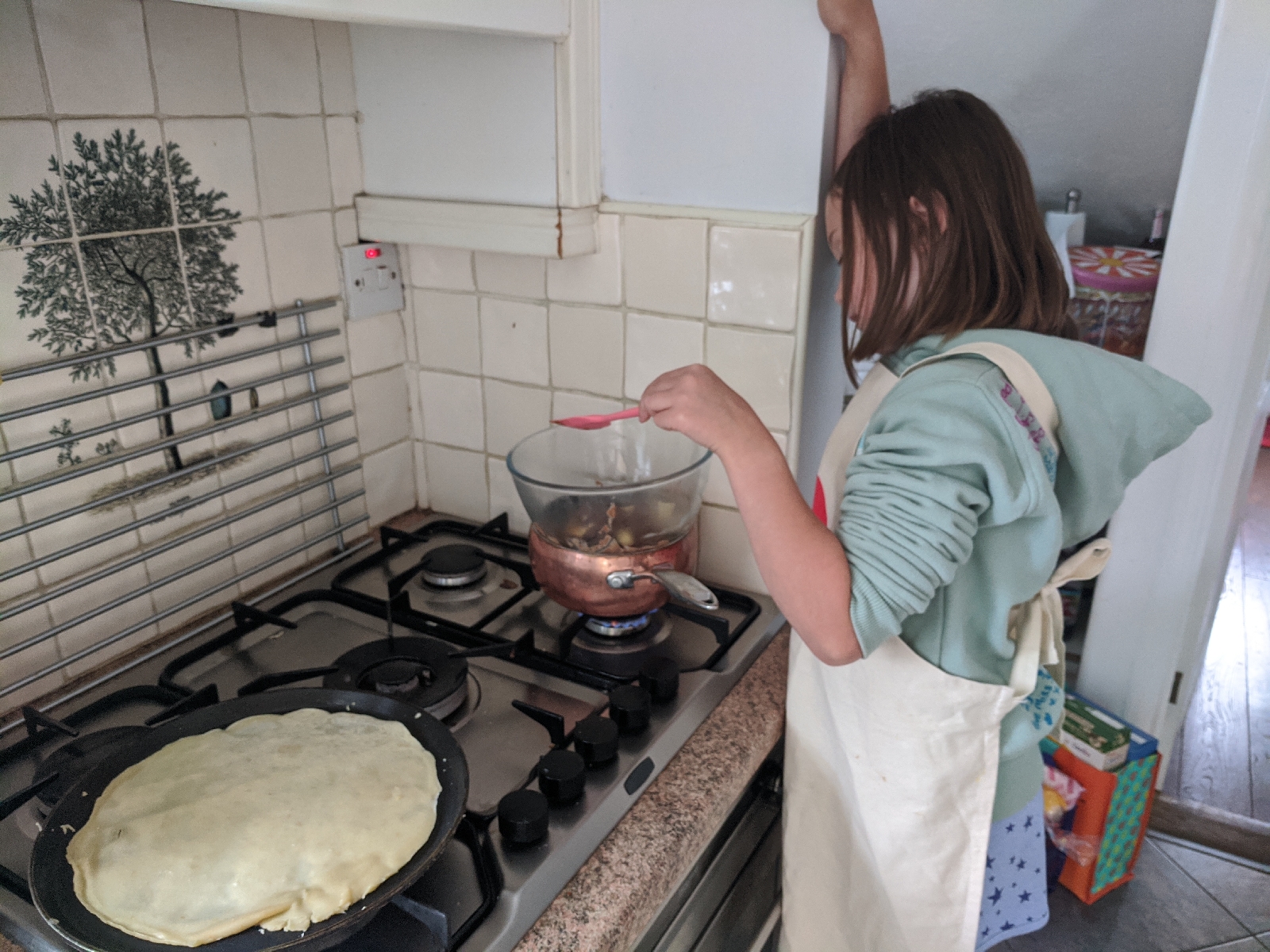 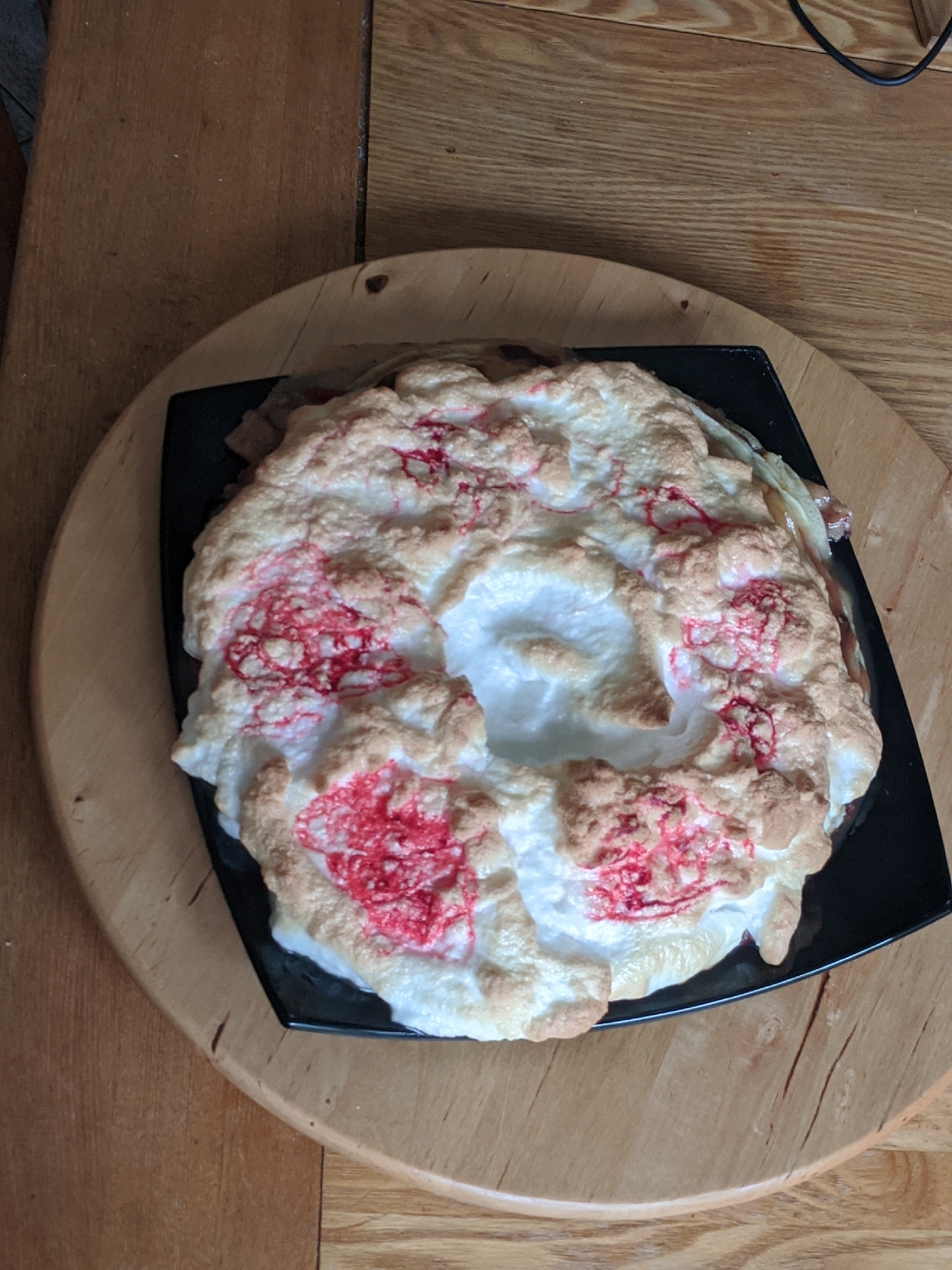 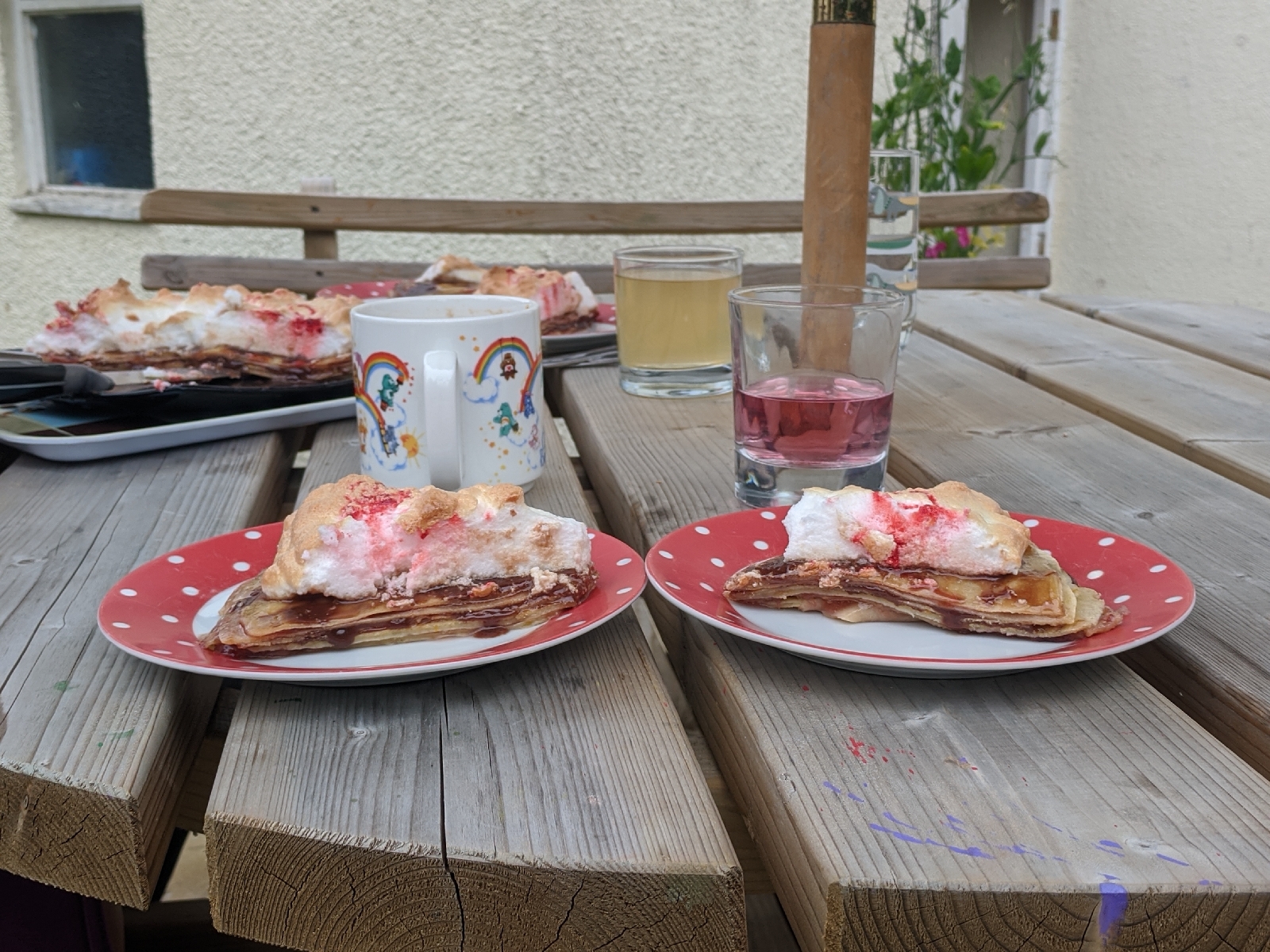